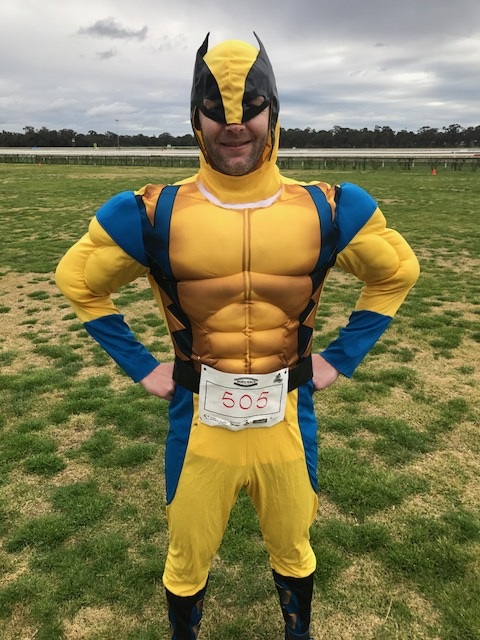 The 2017 Bendigo Run For Dad has raised almost $8000 for men’s health and prostate cancer awareness.

“We were really happy with the turnout given the cold and threatening weather conditions on the day,” Run For Dad spokesman Keith MacDonald said.

“It was fantastic to see so many people getting into the superhero theme too which adds to the atmosphere.”

“Run For Dad is about raising awareness of men’s health and prostate cancer. It’s about getting men out, active and thinking seriously about their health while having some fun with their family and loved ones. To raise money for the men’s health clinic and the Prostate Cancer Foundation of Australia is a great bonus,” he said.

“We want to thank everyone who took part and the people who made a donation online through the registration website. Your contributions will make such a difference.”

Mr MacDonald said a survey of Run For Dad participants showed the success of the day.

“We got some really favourable comments. Some of the common themes for people taking part were great fun, the cause, getting out and exercising, having a laugh with others in costume, mateship, atmosphere and community spirit,” he said.

“One person wrote: ‘I honestly thought it was a terrifically well run and supported event and we have been to a lot. Well done to you all’. A lot of effort goes into putting the day on and it’s very rewarding to see people getting so much out of the event. It’s wonderful.”

Mr MacDonald thanked the community groups and businesses that helped make the Run For Dad a success.

“The feedback from the day was that people really enjoyed the breakfast cooked by the Lions Club of Bendigo so we thank them for giving their time,” Mr MacDonald said.

“Our major sponsor Moira Mac’s is a great supporter of the Run For Dad and Villawood Properties, The Athlete’s Foot, Purtill’s Nursery, Bendigo Property Management and WIN TV all played a role in the success of the event.”

Mr MacDonald said entries would soon open for the 2018 Run For Dad and people should visit www.bchs.com.au to learn more.