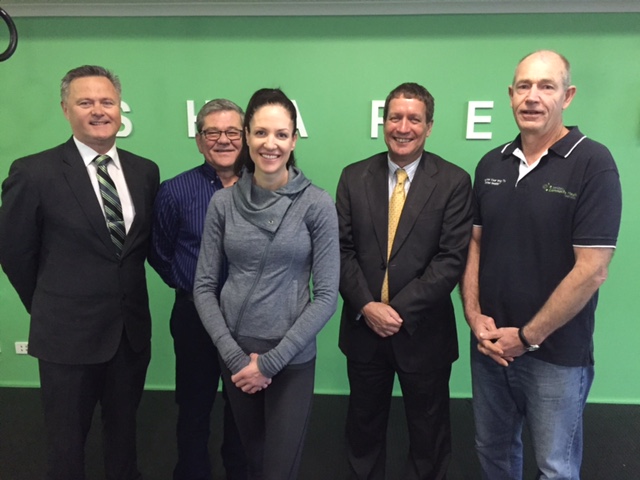 Two Bendigo secondary school principals and a university lecturer have started on the road to a healthier lifestyle by accepting a 10-week Bendigo Community Health Services Men’s Health Challenge.

Their challenge will finish during the Bendigo Community Health Services Men’s Health Marathon from August 25 to September 4 – 11 days of activities designed to get men out, active and thinking seriously about their health.

“At a personal level, probably a feeling that at my age you start to think about your condition. You stop playing active sport and there comes a time when you think: ‘Gee, maybe I could be looking after myself a bit better’,” he said.

“The second was it’s good to be involved in something that might help promote that message to other people.”

Mr Pearce admitted he had already learned a major lesson from the opening weeks of the challenge.

“I’m really conscious that I was grazing on a whole range of food and just eating whatever I wanted when I wanted, so having a bit of discipline around my diet. That’s been the most important learning for me - without too much difficulty I could look after myself better by eating better.”

Mr Pearce has lost three kilos in the opening weeks.

“I’m feeling lighter and I’m feeling like I’ve got a little more energy, so from here on it’s about maintaining that discipline and getting into routine.”

La Trobe University Bendigo lecturer Kirk Peterson said a lack of exercise and a desire to feel better where the motivating factors behind taking up the challenge.

“I’m at an age where things were slowing up for me. I didn’t feel like I had a lot of energy, was a bit stiff – really wanted to develop some strength and flexibility,” he said.

“Doing some form of regular exercise is a really good thing. The diet side of things has been a slower transition because you are breaking long-term habits but I’m certainly more conscious about what I put into my mouth and eat. It has changed my dietary habits.”

Mr Peterson said he had already lost two kilos on the challenge.

“That says stick with it. I had an aim that I wanted to lose about nine kilos and so we’re on the way,” he said.

Girton Grammar principal Matthew Maruff said his decision to take on the challenge was two-fold.

“One was personal about being what I say to the kids at school – healthy mind and a healthy body,” he said.

“Some of us are in a position of influence and that if you can, with really powerful moral purpose positively influence the lives of others, then that’s the over-riding motivation and that’s why I’m very happy to talk about my failures along the way to success.”

Mr Maruff said the opening weeks of the challenge had shown him people are capable of far more than they would ever realise.

“It’s interesting and ironic that as an educator I’m always doling out that wisdom to young people and occasionally it’s good to recalibrate and see it in yourself. I’m learning a great deal more about the relationship between inputs and outcomes - the way that bracket creep in diet can affect you but also with this sort of training and approach just how good you feel… how positive and energised.”

Mr Maruff said exercise and a better diet had resulted in a quick change in his health.

“You start to feel much better when, for instance, there are colleagues who are back in the gym because of me chatting about this and just raising consciousness.”

Mr Maruff said he would use little goals to drive him through the challenge.

“There’s the physical goals – I want to improve my running and with the core strength that’s coming I am. In the push up test I think the base line was 32 and I’d like to push that to 50 non-stop. Little things to motivate and inspire.”

Bendigo Community Health Services thanks the Men’s Health Challenge participants for giving their time to raise awareness of men’s health.

We also thank Amy Holmes from Shape Health and Fitness for taking on the challenge of guiding Mr Pearce, Mr Peterson and Mr Maruff through the Men’s Health Challenge.