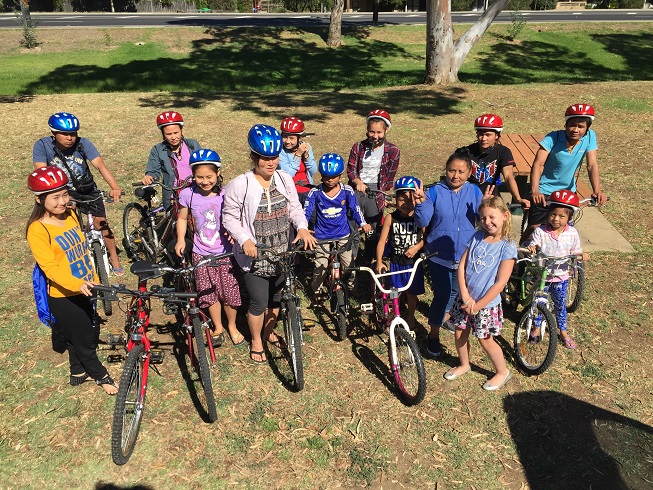 Recipients are also given a helmet, pump and drink bottle.

Not only does this give new arrivals an easy mode of transport, it encourages them to spend time outdoors together, increasing their activity levels and exploring their new city.

The recycled bikes were donated to BCHS under the Department of Justice and Regulation’s Wheels in Motion program which involves Victoria Police, the Eaglehawk Recovery Yard and Moroni’s bikes.

Offenders completing community work in Bendigo have repaired about 170 discarded or unwanted bikes and given 110 to groups including Eaglehawk North Primary School, BCHS and Koori Cubs in Mildura.

The Karen family who arrived in Bendigo about a year ago had never owned a bicycle and had to learn how to ride.

Myint Tin said it was now easy for son Po Toe to visit his friends and have fun riding with them. Daughter August Say Ber had also mastered the skill, while youngsters Paw Say Say and Eh Ka Ler were still learning to pedal in their backyard.

BCHS settlement services case worker Nay Chee Aung said the cost of buying new bikes was prohibitive for many refugee families and they were thrilled to get a roadworthy set of wheels.

“It really puts a smile on their faces,” he said.

Nay Chee said one father of a child with complicated needs was now able to pedal to the park with his youngster, while another was riding to his study groups.

“There were also a couple of young kids from Crusoe College who it has really helped because they lived too far from school to walk, but now they can ride their bikes,” he said.

“We are just delighted to be involved,” she said.

“Some of these refugee recipients may have never had a bike before so it is a whole new experience for them.

“It is a form of transport and a way of discovering where they live, because Bendigo has a myriad of bike paths throughout and is a really great bicycle city.”