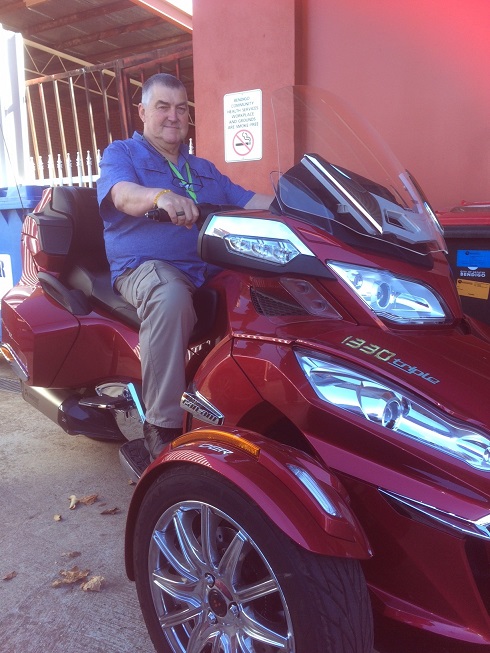 When he’s not cruising around town on his distinctive red three-wheeled Can-Am Spyder, Lee is helping clients who’ve had run-ins with the law to regain their self-esteem and lose their dependence on harmful substances.

“I think I learnt most of my counselling skills from behind the bar,” says the man whose mid-life career change took him from serving alcohol to dealing with its destructive aftermath.

“I worked and managed pubs for years and you meet so many people from all walks of life.”

About 10 years ago, Lee became disillusioned with poker machines taking over from the traditional social scene at hotels and decided to put his long-held people skills to good use.

He completed a Certificate IV in alcohol and other drugs and was a case manager and outreach worker at a Salvation Army homeless shelter in Melbourne before joining BCHS five years ago.

The word “forensic” in his job title relates to the law and his referrals come court-ordered, via Australian Community Support Organisation and Bendigo Corrections.

“All my clients have some sort of drug and alcohol problem related to their offending,” he says. “I believe trauma underlies most of the problems - many have come from dysfunctional families and don’t have good coping skills. So they cope with alcohol and drugs.”

Lee says while the problems have always been there, his workload has grown since Victoria abolished suspended sentences in 2014, possibly due to more corrections orders being made.

Ice, heroin and cannabis are prevalent in Bendigo, he says, “but alcohol is by far the worst drug because of the problems it causes, its ease of availability and its constant promotion”.

The clients Lee counsels can be dealing with anger, violence, guilt and frustration, trying to reconcile their own lack of self-worth with society’s judgemental attitude.

“In my experience, humans are no different to animals – if they are mistreated, you have to build up their trust again. So I try to build that rapport with them.

“I am a big one for injustice and that’s what keeps me in the job. As a society, we are so judgemental of others. People don’t choose to be a drug addict, they are not born that way, and they don’t wake up one morning and choose it as a profession. It’s an addiction, but more importantly it is a health problem and it should be addressed as one.

“A five year old girl who is abused or brought up by an alcoholic father doesn’t choose to follow that lifestyle. But people who don’t ever experience these things don’t understand.”

He cites one client who wanted to hit him during a counselling session as an example of a response to a traumatic event. Before the situation could escalate, Lee identified the underlying issue and talked the man down.

“It turned out he was grieving a death, and he was just reacting to that so I understand where he was coming from. It doesn’t make his behaviour okay, but it does explain it.”

Lee’s approach involves cognitive behavioural therapy and mindfulness, focusing on the client’s behaviour and how to improve it, rather than attacking the person individually.

The most important part of his job is being a good listener.

“I had one client who had been around for a while and the feedback from her was that I really listened,” Lee says. “I listen without an agenda, with a focus on helping them manage their drug or alcohol problem.

“The change in them can be amazing – it is a process but that lady I just spoke about has been alcohol-free for three months and that makes my job worthwhile.

“One of my main beliefs is we that are all human and we all have feelings and emotions - men don’t have to be tough, that’s a complete fallacy.

“Hopefully clients feel they can relate to me. I don’t know what they’re feeling, but I can understand some of the things they’ve been through and try to validate their experiences.

“Then we can work towards finding their strengths, because they already know their own weaknesses. Just one little strength is enough to work on. I tell some of them to go kiss themselves in the mirror and say, ‘I love me’.

“It’s like throwing holy water over some of them, who’ve got no sense of self at all. It challenges their beliefs about themselves in a positive way.”

Lee says though he is not a religious man, he is spiritual.

He enjoys Reiki and the healing energy of meditation, but doesn’t force that onto clients.

“I do talk to them about breathing, though. We all need to learn to relax a little bit.

“Some people are so traumatised they are fight-or-flight - even when they’re asleep they have one eye open. And it simply tires them out.”

Away from work, Lee and his partner enjoy getting away and chilling out on his motorbike.

Or should that be motor-trike?

“I did have a two-wheeler but my partner wouldn’t ride on the back of it,” he laughs.

“We went to look at a three-wheeler, she sat on it I had to buy it because I couldn’t get her off. That’s my story, anyhow!”

The pair plan to attend a gathering of Spyder enthusiasts in Port Fairy in October and another muster Hahndorf, South Australia, next year.

His interest in bikes might give Lee some credibility with some of his clients, but he reckons he’s a big softie at heart.

“I’m a member of the Ulysses motorbike club, which is a social group for riders over 40. It’s not an outlaw gang, just a lot of older people riding around on their bikes, which is great.

“Well we are not really old, more like in our prime.”