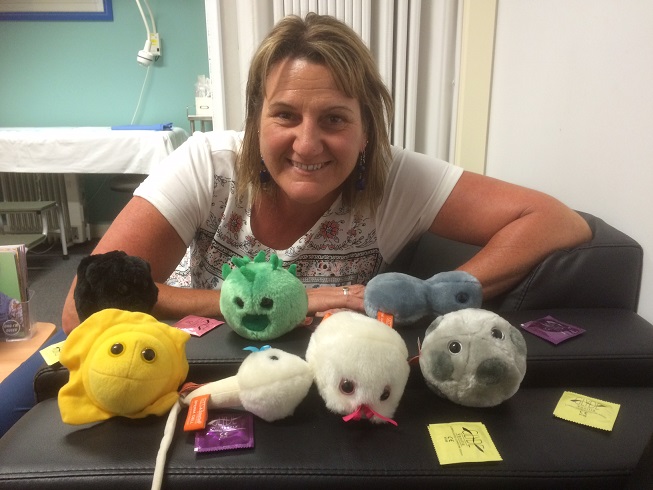 LOUISE Holland reaches into a storeroom box and pulls out a colourful array of plush toys.

“Meet Chlamydia!” she grins, holding up a green fluffball that, on closer inspection, isn’t quite so cute after all. “And this,” she says, waving a rather gloomy-looking yellow creature, “is Herpes. You have to make sexual health education fun, or people will just switch off.”

As a community health nurse and clinical consultant in women’s, sexual and reproductive health, Louise is well versed in the challenges of addressing topics traditionally swept under the carpet.

But she is involved in several key initiatives through Bendigo Community Health Services and external organisations to improve access to important information and programs.

“BCHS provides a diverse range of services in this area, from education down to one-on-one clinical consultations, including sexual health assessments, STI testing and treatment, blood-borne-virus counselling and contraception.

“We have a text buddy reminder service that sends SMS to young people for check-ups or results, free emergency contraception, women-centred early unplanned pregnancy counselling and referrals for terminations.”

All BCHS sites also stock free condoms in a basket at the front desk for anyone to use.

“I have four boys (now aged 18 to 26) and they probably feel scarred because they were exposed to them from a very young age,” Louise laughs.

“When they were in primary school they had to help pack the condoms in the little packs. It was an amazing initiative that forms part of our overall organisation public health response.

“We have deliberately put our hand up and said that sexual health is important to us as an organisation, which makes my job much easier. This is as important as our Thursday night soup kitchen, or our winter coat drive. It’s not a one-off thing - it is ingrained in our culture.”

Louise’s interest in her field was ignited during her early career as a midwife in Perth, partly by the experience of several young male relatives who unexpectedly became teenage dads.

“It was young women’s total lack of information and choice at the time that sparked my interest,” she says. “I was the midwife seen as the one who could look after teenagers having babies because I could work so well with them and it just all stemmed from that.

“It also comes from an absolute desire for women to be empowered to make informed choices about their lives, rather than sex being seen as something that just happens to them.”

She is liaising with staff and clients from various agencies on an integrated health promotion project, which includes workplace women’s health talks and school education sessions.

Louise chairs an internal BCHS network to encourage staff to be aware of sexual health regardless of what they are seeing a client for, and refer them on if needed.

She is also a lead worker on a joint project with the Victorian AIDS Council related to sexually transmitted infections and blood-borne viruses, trying to smooth the referral pathway to make it easier and less confronting, especially if clients wish to remain anonymous.

This includes working with agencies where sexual health is not core business, but who have an interest from working with the initiative’s target groups: young people, Aboriginal and Torres Strait Islanders, gay men, and those of culturally or linguistically diverse backgrounds.

Louise says the main barrier to people using the sexual health services they need is accessibility, and that’s why her work in the wider community is vital.

“You can have a building, a door and someone sitting at reception, but if you are not visibly seen to be accessible, people in the priority groups just won’t turn up,” she says.

“If you are met with a difficult process to see someone, like you are put on hold on the phone too long or no one is available that day, you won’t do it again.

“If you get through initially but feel your needs are not met, like someone follows a script instead of looking at you as a whole person, you may go once but you’ll never go back.

“If the language is not sensitive to the natural language of the client (using complex medical terminology with a young person, or not engaging an interpreter for a non-English speaker), you will be seen as a non-sensitive practice and negative word of mouth will spread.

“If you charge an exorbitant amount and the client has no money, they are not going to turn up. And if you don’t explain privacy and confidentiality or you don’t act on it, for example you send them a letter home in the mail, they will not come back.”

Louise says she has always been interested in the big picture, even when she was a midwife.

“Some nurses see their ultimate role as getting their patients discharged from hospital.

“But I was always interested in what happened to patients after they left hospital after having a baby – was the mum going to go and get contraception, did she have a good doctor, would she be comfortable talking to them? And I asked those extra questions.”

This stands her in good stead today, as she campaigns to make sexual health a priority for all.

Away from the office, Louise is equally passionate about sport. She plays tennis for St Liborius, is secretary of the Eaglehawk and District Tennis Association, and is one of the netball coaches for Bears Lagoon Serpentine in the Loddon Valley league.

“Ultimately, I would like to work in some remote areas of Australia where the access to health care services isn’t easy and feel like I am making a difference there.

“That sense of social justice flows strongly through my veins and it is probably why I sit really well within community health. Battling to get funding for people who don’t have a voice is at the very foundation of what I do.”