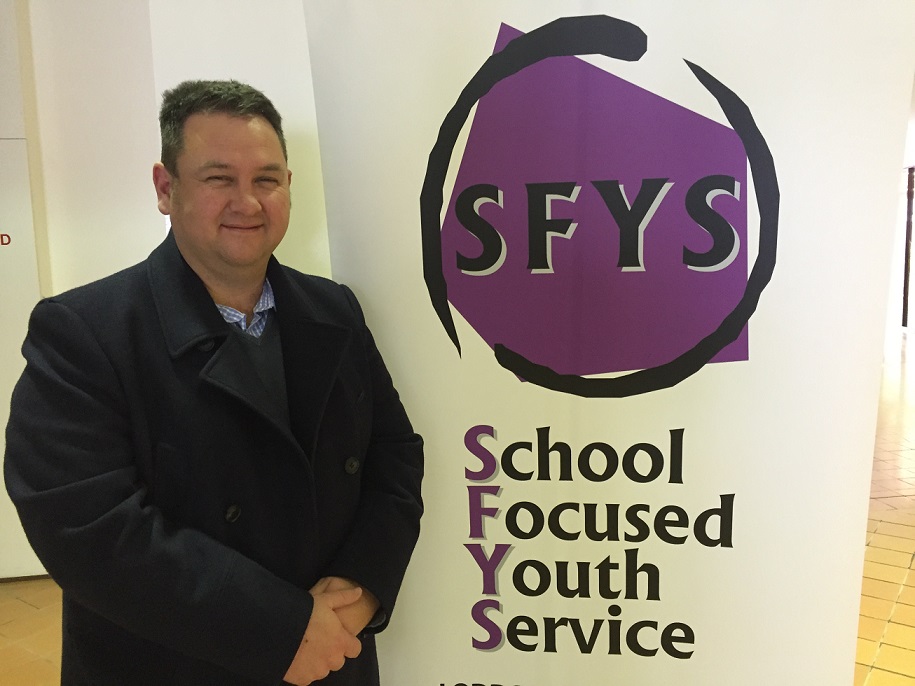 TRAINED psychologist Paul Taylor understands that moving from primary to secondary school can be stressful for any child, let alone those in danger of disengaging from education.

He also knows it is vital these at-risk students be supported and encouraged through that tricky transition to give them the best chance of reaching their full potential.

“That encompasses health, employment, and all sorts of things - a child who finishes Year 12 has a longer life expectancy than a child who does not and their earning power is increased, so they pay higher taxes for longer.”

Paul is funded by the Department of Education to build partnerships between schools and community groups that inspire kids to keep coming to class.

He was instrumental in setting up a program linking 20 children stepping up from primary to secondary school in Eaglehawk with the Smith Family charity, which employed a transition co-ordinator to oversee the process.

“The co-ordinator worked with kids who were likely to struggle with transition to help keep them engaged,” says Paul. “This can be a time where kids can slip through the cracks, so it is important families know about the supports that are in place to help them.”

Paul says the program was an overwhelming success.

“One of the first things that suffers with kids who are disengaged is attendance. They get up in the morning and walk out the door and never make it to school for whatever reason.

“But the kids in this program had an attendance level of about 96 per cent, which was above average compared to the rest of the year seven cohort.

“Students’ stress levels about going to school were also reduced after being involved with our program. It is great to see the kids feeling a lot more confident about such a big life change.

“We funded the first 12 months, but the schools were so impressed with the outcomes that they agreed to fund it themselves and make it ongoing.”

The Smith Family now has a Learning for Life co-ordinator based at Eaglehawk Secondary College who runs programs in local primary schools. She provides material support to scholarship families and runs learning clubs, homework groups and after-school activities.

Paul says he gets great satisfaction from the face his role allows him to help multiple children simultaneously.

“Rather than doing it one child at a time, you are working to put systems in place that can make a difference in the lives of a large number of students,” he says.

“I was student counsellor at Bendigo TAFE previously and that was one-on-one all the time in a clinician role; this is a strategic position where you look at large-scale program change.”

He was a Centrelink psychologist and student counsellor before joining BCHS in April 2014.

“Before starting this role, you thought some kids dropped out of school because the adults weren’t parenting well and let their kids not go to school and do whatever they like,” he says.

“But working with BCHS, the Smith Family and other organisations, you realise there are a whole lot of other things going on in the background for these families you are not aware of.”

Originally from Kerang, Paul has a nine-year-old son Seth and a 20-year-old step-daughter Madeleine. His wife Jane died in a road accident last year and he says the care and support he has received from within BCHS has helped him and his family through a very difficult time.

He played football in his youth and now gets great enjoyment from watching Seth run around for St Therese’s under-12s. (Following Richmond in the AFL is not always as much fun.)

“I am a sporting dad,” says the 41-year-old. “You have to be with junior sport these days because everything is run by volunteers. I umpire the football or do time-keeping - one of those match day roles - and I help run training for his team this year.

“I have also recently got back into tennis and play for Axedale. I started filling in this year and our team ended up winning the grand final. I played the four weeks leading up to it but had a housewarming and birthday party in Melbourne so I couldn’t play in the grand final.

“But they won by one game and celebrations were long and loud.”

The State Government has renewed funding for school-focused youth services and Paul is now planning target groups and programs to be offered over the next two years.